The original Yankee settlement was near Leffingwell Cove, where there was a wharf for some years; but as more settlers came in, the present site was favored. The early homes were built mainly of rough pine lumber, sawn by Mr. Leffingwell, first with a horse-powered and later with a steam-powered mill. The early name of Slab Town suggests the original appearance of the village.  As the lumber, ranching and mining interests increased in the region, the village became more prosperous, and late in the sixties, it adopted the more dignified name of Cambria, largely through the influence of a surveyor from Cambria County, Pennsylvania. Many small ranches were established in the surrounding territory, some on government land, some on land claimed by Spanish-Californian grantees, and some on land purchased from the grantees. Attempts at orcharding and general farming were not especially successful, however, and it was not until Swiss dairymen set the pace for a major industry during the eighteen-eighties that prosperity came to the region. By the turn of the century Cambria was shipping over a ton of butter per day to San Francisco via the wharf at San Simeon. Cheese production is said to have averaged over a half-ton daily.

WHY HISTORY IS IMPORTANT

With poor roads and slow transportation in the hinterland, Cambria was favored with relatively easy transportation by steamer from local piers at San Simeon and Cayucos. Some of the local merchants and ranchers built very attractive houses of redwood, most of which are still standing. Cambria was the center for supplies and services for the region.
It was not until the nineteen-twenties that the Cambria Development Company acquired the ranch of Mr. John Taylor and some other properties and sold lots outside the village limits. Cambria has since become widely known as a community of cabins and homes among the pines.  These stories and hundreds like them can be found in the Cambria Historical Society's archives. Three boxes contain Paul Squibb's interview notes and other research on many of Cambria's early residents. The ultimate conservationist, Mr. Squibb scribbled his notes on the backs of bank statements, advertisements, even letters from the Lion's Club.  The Cambria Historical Society maintains a Paul Squibb collection and the recollections of many other Cambrians — priceless artifacts that give us a sense of place and provide a source of pride for our community. They impart the lessons of America's heritage and values and inspire us with the tenacity and energy of the early pioneers. They give us reason to cherish the homegrown flavor of our town and give Cambria its distinctive personality. We'd love to share them with you.

Wilfred Marquart Lyons was a Cambria native son and founding member of the Cambria Historical Society. He was the library of local history. The one turned to most for true tales about Cambria's past. After his death at age 96 in July 2009, the Historical Society created the Wilfred Lyons Archive with funds donated to us in his honor. We feel it is a fitting tribute to the man, who over nine decades, kept a most valuable archive for Cambria with his writings, personal collection of papers and photos, and his generous sharing of knowledge. 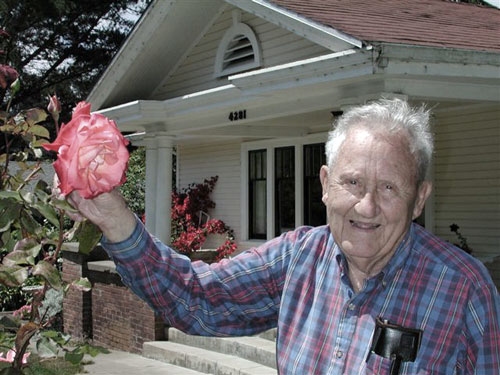 ​Additional contributions will help us collect, maintain and exhibit Cambria history for all to enjoy. Click here for information on making a donation online or by mail.