The Building of Highway One

IT SEEMED AN IMPOSSIBLE FEAT…
BUT THEY DID IT!

The 100-mile portion of California Highway One between Carmel and San Simeon was built between 1921 and 1937 and the ruggedness of the terrain required 32 bridges. The first bridge was a small timber structure across Salmon Creek about 19 miles north of San Simeon and opened in 1928. 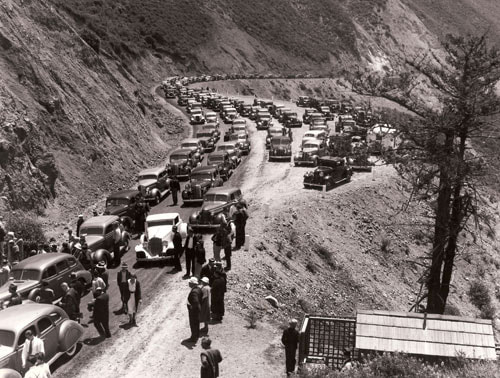 The largest, most famous and certainly most photographed is the Bixby Bridge, about 13 miles south of Carmel. This was also the most difficult to build. It has an open spandrel arch (with open space between the deck and the arch) and a 356-foot-long deck about 260 feet above the creek. The arch is supported by two concrete abutments anchored to the sheer rock walls 140 feet above the creek bed. The length of the bridge is 716 fee, and when completed on November 23, 1932, the Bixby Bridge became the largest arched highway structure in the Western states. It is also unusual because it is built on a curve.
​
A similar, but smaller, open spandrel concrete arch bridge was constructed across the mouth of Rocky Creek. This graceful bridge has an arch span of 239 feet, and the 497 feet of total deck length carries the roadway 150 feet above the creek. Along another few miles, similar reinforced concrete arches of shorter spans were built across Granite, Garapata, and Malpaso creeks, and another arch bridge consisting of three short arch spans crosses Wildcat Creek about five miles south of Carmel. 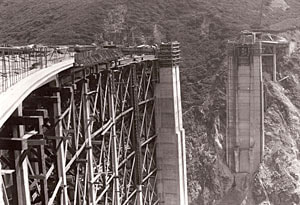 The seven concrete arch bridges between Point Sur and Carmel were listed in the National Register of Historic Places in 1986.


On September 18, 1934, convict labor from two camps working towards each other met, and the final barrier was removed. A few official cars drove the entire distance from San Simeon to Carmel for the first time, although much of the road was still under construction and was only one lane wide in places. Many of the bridges had yet to be completed, so these vehicles had to traverse steep detours into some of the canyons, crossing the streams on temporary bridges.


On the morning of June 27, 1937, a caravan departed from the Cambria Pines Lodge led by Governor Frank Merriam's car. The caravan arrived at San Simeon and the dedication ceremonies began there. Mrs. Rigdon dedicated a silver fir to her husband's memory and officers of the Grand Parlor of the Native Sons dedicated two sequoias. 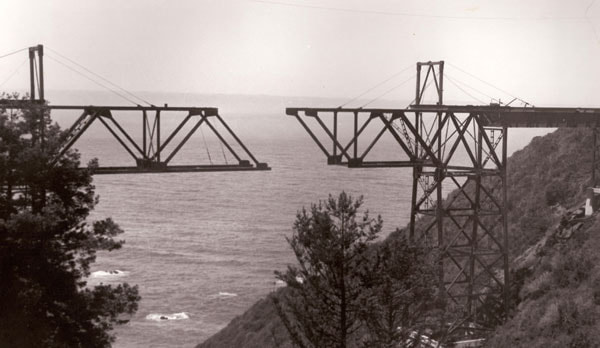 ​Later that day, a gala celebration was held at Pfeiffer Redwoods State Park to commemorate the opening of the highway, with Governor Merriam, Dr. Roberts, and Public Works Director Earl Lee Kelly in attendance. A boulder was symbolically pushed off the road to formally open the highway to traffic. It was called the Carmel-San Simeon Highway, but was better known as the Roosevelt Highway in honor of the President. Actual cost of the construction was around $10 million, a bit over Dr. Roberts' original $50,000 estimate.
​
This portion of Highway One from the Carmel River to Cambria was incorporated into the state highway system as California Highway 1 (1939), declared a State Scenic Highway (1965), and designated as an All American Road by the US Government.