William Leffingwell reported that, before the ground was cold, pioneers B.H. Franklin and George Lull were already putting sticks in the ground.  "The fire actually seemed to lend new life to the town, even though life savings and fortunes were swept away," Leffingwell said.  At the time of the fire, Cambria was a booming town of 1,000 residents – the second largest community in the county. But it had no water system. Shortly after the fire, J.D. Campbell put in a large redwood water tank above the Bank of America and that became the town's water supply. Historian Dawn Dunlap says wooden pipes that carried water to the community were still in use in some places a few decades ago.  One building that survived the Great Fire was Rigdon Hall, a two-story structure built in 1884 or 85 where Cambria Drug & Gift is today. 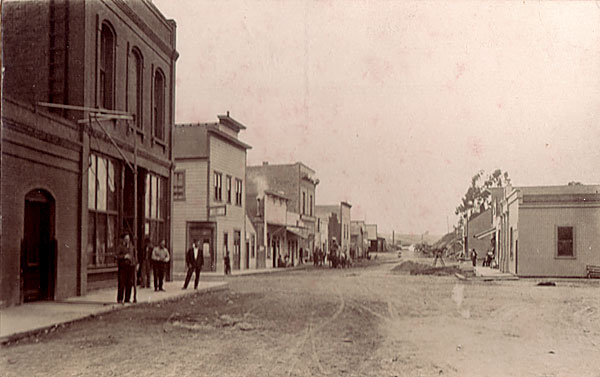 Paul Squibb, who was a longtime Cambria Lions Club member and president of the SLO County Historical Society, wrote about Rigdon Hall in 1961 in a letter to Scoop Morgan, former editor of the Cambrian: (keep in mind that Lee Street was the original name for Burton Drive)

"Mr. George Dickie, of Lee and Center Streets, Cambria, says that Rigdon Hall had been in use for several years when he came here in 1890. Mr. John Eubanks had a blacksmith shop on the ground floor. It was the custom to fire his anvils with black powder in times of celebration."

Mr. Dickie acquired the hall in 1913, Mr. Squibb reports, and in the late twenties, Roland Houtz and others lowered it 15 feet to a single story street level.  Before 1916, a moving picture truck would park outside and wires were led up through the windows to show the pictures upstairs. The maple floor, installed by Elmer Rigdon probably in 1912, was not used much for roller skating, "It was probably too small and too good for skating," Mr. Dickie said.  Another of Paul Squibb's interviews with George Dickie reports that blacksmith Eubanks built Cambria's man-hauled hook and ladder truck in 1898. Magic lantern slide shows – (projected still pictures using a kerosene lamp) were shown upstairs in the hall to raise money for the truck. Mr. Squibb reported in 1960 that the Lion's Club owned the old fire truck, having rescued it from rotting away.